Some people put off addiction treatment because they’re afraid of drug and alcohol withdrawal symptoms. The truth is side effects from alcohol and drug detox are much more tolerable when you undergo them at a professional detox center. It’s when you detox at home and stop alcohol and other drugs cold turkey that your risk increases for the very painful, dangerous, and deadly withdrawal symptoms that you fear.
FIND OUT MORE Why Is a Professional Detox Program Important?

During drug and alcohol detox, the body flushes out substances and toxins. This process can be intense and dangerous, depending on factors like:
Professional alcohol and drug detox is necessary so medical professionals can intervene if you experience life-threatening drug and alcohol withdrawal symptoms. Detox specialists also have ways to ease pain and intense cravings. Medical professionals warn against quitting cold turkey at home. Depending on the substance, your drug and alcohol abuse history, and physical make-up, withdrawal symptoms may include: Alcohol and drug detox can be a grueling ordeal to endure on your own. Without medical interventions, the effects of withdrawal can cause extensive physical pain and psychological distress. It doesn’t get any easier with repeated detoxes. The more frequently you go through alcohol and drug detox, the higher the risk is for complications during the process. That’s why it’s imperative to enter an addiction treatment program after the detox process to prevent relapse.

What Causes Alcohol and Drug Withdrawal?

When you regularly use alcohol or drugs, your body builds up a tolerance to these substances. It becomes accustomed to the presence of drugs or alcohol, even depending on them to function normally.

Drugs and alcohol impact brain chemicals that are tied to major body processes. Because your central nervous system begins relying on drugs and alcohol to produce these chemicals, when you quit using substances, your system goes into shock trying to produce and rebalance chemicals on its own. This is what sets off physical and psychological withdrawal symptoms.

In the care of medical professionals, the process of detoxification is safe and much more tolerable than trying to quit cold turkey at home. Medical detox safely removes drugs and alcohol from your system. Physicians prescribe medications to help ease withdrawal from alcohol and drugs and nurses monitor your comfort and safety around the clock. Many detox centers provide private or semi-private rooms for detox with comfortable beds and warm decor. There are often common areas where you can visit with other patients, watch TV, and hang out as you feel up to it. The time it takes to detox is different for everyone, but typically takes from two to seven days. Drug detox can involve any drug or combination of drugs and allows the body to expel substance-related toxins from your body. Withdrawal symptoms may be mild to severe, depending on: Drugs like heroin and opioid painkillers present a painful set of withdrawal symptoms, but the detox process is rarely ever life-threatening. Only in cases where medical complications severely compromise your health might an opioid withdrawal be deadly. Tranquilizer and sedative drugs like benzodiazepines and barbiturates often require a slow tapering down of dosages until a full withdrawal can occur safely. In most sedative detox cases, the patient is a poly-drug abuser, so detox addresses all substances concurrently.

The two main classes of drugs most treated in drug detox are stimulants and depressants. Each class has a unique set of addictive effects on the user, and a unique set of withdrawal symptoms during detox.

The specific symptoms vary by type of drug, and the severity of the symptoms depends on individual circumstances, including:

Some of the drugs that commonly require professional drug detox are:

Most drugs of abuse have their own set of withdrawal symptoms, and some can be life-threatening without medical assistance and supervision. Although the goal of a drug detox program is to rid the body of substances and their toxins, the process can vary greatly between drugs of abuse.

Alcohol and drugs, such as heroin, cocaine, and prescription drugs, alter the brain in ways that make quitting difficult outside a medical detox program. The FDA allows medication-assisted detox that helps you wean off a substance as opposed to quitting cold turkey.

Opioid drugs like heroin and prescription painkillers are depressant drugs, with effects like shallow breathing, slowed heart rate, and drowsiness. Although detox from opioids is not life-threatening, the symptoms are extremely uncomfortable. Often, withdrawal symptoms become the main reason for continued drug-seeking behavior, to take more drugs to prevent painful withdrawal symptoms.

Withdrawal symptoms may be mild to severe and can include the following:

Methods of opioid detox are medically monitored detox and medication-assisted treatment (MAT). Although MAT is not detox, it can help you quit short-acting and highly abusable opioids, replacing them with prescription drugs such as a long-acting buprenorphine/naloxone combination opioid-like Suboxone®.

With medical assistance the following symptoms can be managed to make opioid detox more comfortable:

Opioid detox usually lasts between five and ten days, depending on the individual and type of opioid abuse.

Also known as sedative-hypnotic medications, benzodiazepines are often prescribed to treat anxiety, seizures, or sleeping disorders. They are also abused for recreational purposes. Benzodiazepines are central nervous system (CNS) depressants that can cause:

Detox from benzodiazepines can be dangerous, especially when attempted cold turkey without medical assistance or monitoring. The safest way to come off benzodiazepines is to taper the dosage of a long-acting benzodiazepine over time slowly. This process can take several days or weeks, depending on the length and severity of the abuse. Only a physician knows the safe and appropriate taper schedule for your health and history of abuse.

The full range of symptoms from a benzodiazepine withdrawal may not affect everyone, but can include:

Not everyone who becomes dependent on benzodiazepines will experience the same withdrawal symptoms. They tend to be more severe in people who have been abusing short-acting and more potent benzodiazepines.

Some people may experience lingering symptoms like anxiety, agitation, and insomnia for several weeks or months after detox.

All stimulant drugs like cocaine, crystal meth, amphetamines, and crack cocaine can have serious, life-threatening effects when abused. Stimulant drug detox generally takes between three and seven days to complete.

Stimulant drugs do not cause the same physical dependence and withdrawal symptoms as depressant drugs, but psychological dependence often makes detox extremely uncomfortable and challenging.

The most common symptoms of detox from stimulant drugs include:

The symptoms of stimulant drug withdrawal may not seem to be severe, but the cravings alone could be enough to spur a relapse. Additionally, many symptoms linger for several weeks or months after drug detox.

Alcohol can have significant effects on the brain’s delicate balance. This can lead to life-threatening consequences when you stop heavy and frequent alcohol consumption. You should never quit alcohol cold-turkey without help from medical professionals.

Alcohol detox can become dangerous at any time, but the most severe symptoms often present between 24-72 hours after the last alcoholic beverage. It is during this time when you’re at the greatest risk of delirium tremens (DTs).

What Is Delirium Tremens?

Alcohol detox can turn deadly in cases of severe alcoholism without medical assistance. Death due to delirium tremens (DTs) occurs in less than 5% of people detoxing from alcohol, but the process can be dangerous and extremely uncomfortable even without DTs.

Signs of DTs may begin one to four days after the last drink, and most commonly occur in individuals who drink heavily for several years. Early signs of delirium tremens include:

What Happens After Detox?

Drug detox is the first step in recovery, but not the last. Alcohol and drug detox programs safely remove substances from your system but do not address the underlying reasons behind addiction or teach you healthy coping skills. Some form of substance abuse treatment and sober support should always follow alcohol or drug detox. Drug rehab provides the tools, education, and skills to help prevent relapse. Our medical detox program in Phoenix, Arizona is staffed with caring health care professionals. You’ll receive 24-hour care in a home-like detox center. With round-the-clock monitoring and the ability to address severe withdrawal symptoms, you can rest easy knowing we have the tools and experience to provide hospital-level care in emergency medical situations. During medical detox, our physician will prescribe drugs to ease withdrawal symptoms that are appropriate for your physical condition and substance use history. Following medical detox, our clinicians will recommend residential or outpatient rehab at our addiction treatment center based on your needs.
FIND OUT MORE 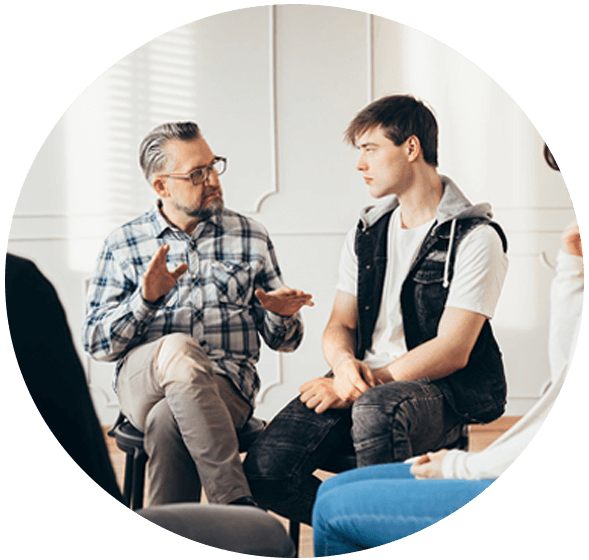 Our Los Angeles treatment center admits six clients at a time, allowing us to provide a discreet environment and exceptional level of individualized attention during detox and addiction treatment. Before residential rehab, you’ll go through medically supervised detox to safely eliminate drugs and alcohol from your body. Our on-call doctor and 24/7 nursing staff will use medications to ease withdrawal symptoms and monitor your vital signs and comfort level.
FIND OUT MORE Vogue Recovery Center offers several levels of care. Our clinicians can work with you to determine what type of treatment is most appropriate for your needs after detox:

At Vogue Recovery Centers, we’ll personalize your treatment plan so your time with us is relevant to your needs, experiences, and preferences. We use a wide range of therapies and approaches that help mend the emotional, physical, and spiritual wounds of addiction. Depending on the location, these may include:

Most insurances cover all or a portion of alcohol detox and drug detox. There are laws in place that require insurances cover rehab services in similar ways as they do treatment for physical ailments. Detox related to a substance use disorder is considered a “medical necessity,” which means insurance benefits should apply to it. Insurances vary in the way they cover members who require medically assisted detox, so the best way to determine out-of-pocket costs is to call us. Our admissions team will work directly with your insurance to provide you an estimate.

Don’t Wait to Get Help

Addiction won’t go away on its own. Take the first step to a better life. Call us today.